Anatomy of a Photograph: Rear Window

We don’t do a ton of downtown Denver weddings, so when we do, I always want to make sure to capture something iconically “urban” to contrast our mountain shoots. When we arrived on scene to scout for Rashni and GEHS’s History Colorado wedding, I knew exactly what I wanted to do. 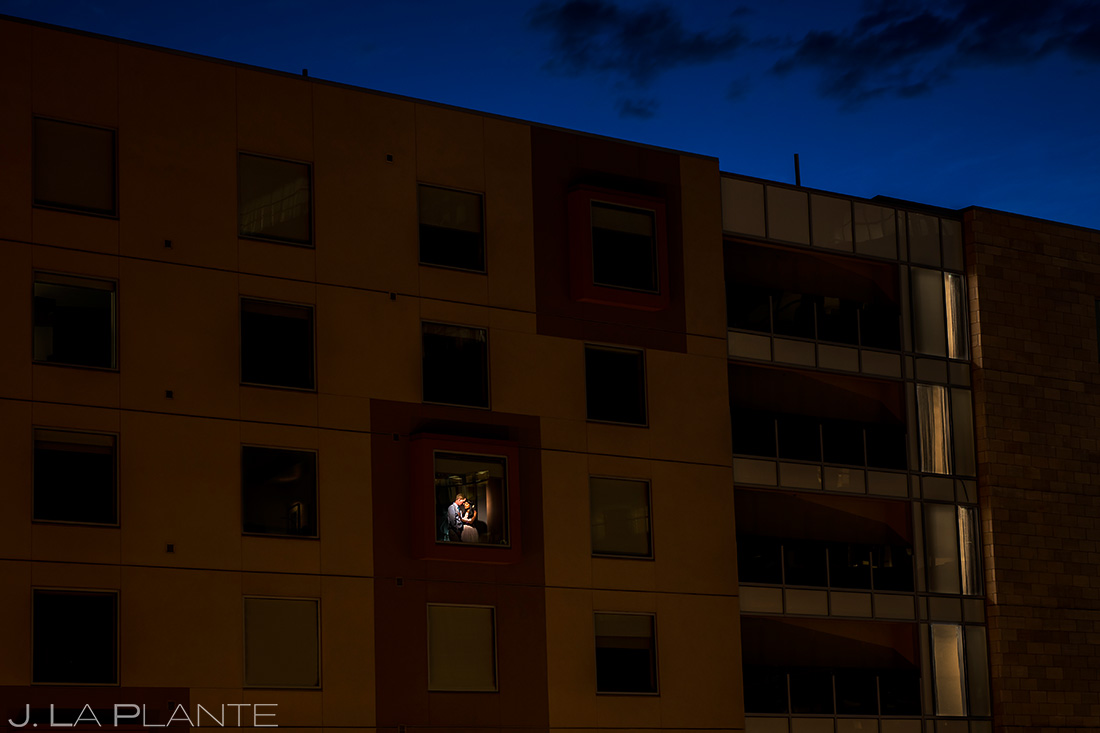 I’m a huge cinefile (movie nerd), so a lot of my ideas for wedding photos come from specific scenes and/or shots in the movies I watch. One of my favorite classics is Hitchcock’s “Rear Window,” and I’ve always wanted to incorporate the film’s imagery into a wedding.

History Colorado just so happens to be directly across the street from The Art Hotel, where the bride and groom were staying after the wedding. Our first order of business was to call the hotel to ensure that Rashni and GEHS would have a room on the right side of the building to get the shot. Luckily enough, the hotel staff was super accommodating and said “No problem! We’d love to see the photo when it’s done!”

Fast forward to the day of the wedding. During the reception, I popped my head out the door every 15 minutes or so until the sky was the right color; I wanted that deep blue that reaches its apex around 30-45 minutes after sunset. Once it was just about perfect, I asked Moira to grab the newlyweds and head across the street to the hotel while I made my way to the 4th floor balcony (where the cocktail hour took place) to get set up.

Now for the Technical Stuff

The primary hurdle here was syncing the flash to my shutter. My Godox radio triggers are super reliable, but not from this distance. As a result, I decided to forego the radio communication altogether and have Moira pop the flash manually. I set my shutter speed to four seconds (to give Moira enough time to pop the flash within the exposure). I then called her on the phone so I could tell her each time I was releasing the shutter. She could then fire the flash immediately after each shutter release to light the bride and groom.

But in using a four-second exposure, there were a couple other things I needed to do before actually taking the shot:

Next, I had to adjust my white balance. The light hitting the façade of the hotel was super orange-y. I had already given Moira a half-CTO (Color Temperature Orange) gel to match the color of the flash to that of the ambient light. She popped the gel on the flash and I set my white balance to 3330k to shift the image toward the blue end of the spectrum, correcting for the orange color. The side benefit of doing this was that the nice blue color in the sky became even richer.

For the coup de grâce, Moira placed a grid on top of the gel (which you can do quickly and easily with the MagMod system) to prevent light from spilling all around the room and direct it straight onto the newlyweds.

Once we were all set to shoot, we did around 10 frames and called it a night. On the way home, I couldn’t help but wonder which Hitchcock film we might tackle next. The Birds? Pyscho? Hm. Might have to move on to a different director…